A story of passwords managers Image by Gerd Altmann from Pixabay

In this article we are going to review two major things :

But first we need a little introduction on password managers.

Passwords are really old as they were used in the Ancient Times (by the Roman Empire for instance).

The computer use of password is almost as old as informatic itself and a password is, in informatic, a sequence of characters, that, when associated to a username, authenticate an user.

But the main point of a password is to be kept secret, and for this purpose, there are several conditions :

The issue with common passwords is pretty clear. It is quick to test all the passwords from a relatively short list. Of course, some websites now use techniques to prevent user to try a lot of differents passwords (you may have to wait between tries, or have to validate a captcha after a certain number of failures), but if your password is at the top of the list, or the website is not up to date with current security, your account will be open to every body.

Moreover, if you are using the same password everywhere, it only needs one not-so-safe website that allows to retry as much as we want to have access to all your accounts.

Imagine that you use a 1 digit password. There are only ten possible passwords (0 to 9). This means that it will be very easy to try all the possibilites (bruteforce) like in the previous case.

But let’s go back to when you had one digit but now you allow the digit to also take alphabetical values. Let’s say that you have one character that can be a digit or a lowercase letter (in the english alphabet). Now you have 36 passwords. Add one more character and it’s 1296 passwords (still not enough).

In fact, if $L$ is the number of characters and $N$ the size of the characters set, you have $N^L$ possible passwords. Hold to this formula, we will go back to it later.

Personal passwords are password based on / containing some of your personal information (name, birthday, cat’s name, etc…). These passwords, even if they have no patterns, and are in no big tables of known password, are not safe because too easy to guess.

These passwords are attractive because it’s easy to remember personnal information, but it’s also easy to obtain someone’s birthday.

It’s good to have a long and complex password. It took you days to learn it by heart but finally you know it, and then you can use it everywhere. Bad idea…

It only needs that your passwords leaks from one place and everything is screwed. And you also would have to change it on every single service you ever used. And passwords leak… often… See : https://haveibeenpwned.com/

The best pratices are then as follows :

A password manager is like a giant postit, with all the passwords written on it, but there are not readable if you have not the master password. Some password managers can also be interfaced with browsers to autocomplete automatically the fields.

Now remember the $N^L$ formula ? Let’s give it an example. Imagine that are we allow :

we now have $k = 94$. Using 12 characters (which is still quite small), we have the number of possible passwords :

And we still are not using all of the ASCII characters (like accentuated characters).

But let’s talk of password managers. If anyway you want to know more about that, and for instance how we use entropy to evaluate the strength of a password, go to Appendix A.

Before explaning what is my current solution, I need to explain my needs :

And that’s basically all. Well I mean, I would enjoy a nice integration with other tools (in particular the browers on computers and keyboards on the mobile devices) but the two main requirements are those one,

The solution that I had until now is this one :

Let’s dig into it.

Keepass is an open source password manager distributed under the GNU General Public License version 2 (GPLv2). But I don’t use the default keepass client. In fact I just use the format of the database, which is KDBX format, originally created by keepass.

Hence, I use as a primary client keepassxc which is also an opensource project, distributed under the GPLv3 and has a nice interface (see below) and a nice integration with firefox : see here for more details.

For the synchronisation, the keepass database is only a regular file, and I just needed to find a way to share it across devices. My solution was to use my nectcloud instance (that I also use for other things than keeping my keepass synchronised).

It is of course possible to use commercial clouds as well to share the database even if you have to trust the companies holding your data (the database is always stored encrypted though).

Issues with the current solution

There are two main issues with the current solution :

The solution ? Vaultwarden, which is a clients-server based password manager. But to understand why it’s really interesting, we also need to talk a bit about Bitwarden.

Bitwarden is a passwords manager that is based on a clients-server infrastructure, and there is a lot of clients (web, windows, macos, linux, browser integration, android, appstore and even some cli tools). There is a strong ecosystem around bitwarden which is the very cool part. Also it’s opensource 🥳.

You can use the vaultwarden servers for free or cheap for a personnal use (see below) and there are also a number of business plans.

You can also host your own server, but it is resources expensive. But another server implementation was made, far more less demanding. This was originally called Bitwarden_RS and is now called Vaultwarden, and the official bitwarden clients are compatible with the vaultwarden server.

The first step is to pull the docker image for vaultwarden :

Then I will generate an admin token for the initial configuration :

The output of this command is, for instance :

This value is not used in production.

Now I will start the docker container with the following command

Here, the port 8080 of my server will be linked to the port 80 of the container, and I will handle the SSL/TLS layer with an apache2 proxy.

After this command is successful, you should have access to a vaultwarden instance on the port 8080 of your server (assuming no firewall blocks this port). This looks like this :

Before doing anything else, I will configure a proxy to have secure connections. In /etc/apache2/sites-available I add the follwing file :

(note that the ssl certificate is a DNS challenge valid on *.nanoy.fr), and then I run the command

And the website is now securely accessible at vaultwarden.nanoy.fr.

As there is no account, we need to enter the admin mode by going to the /admin/ URL and entering the admin code that we generated earlier.

and then there is a number of possible settings to change :

For my part, I have done the following :

The configuration is pretty straightforward. Next I login with the user that I created on step 1 and I get the following :

The next step was to install the clients. To use a custom server, you have to click on the cog in the top left corner and then set a custom URL. And then I started migrating my password. There is a specific import function to import a keepass database, but as my passwords were a bit of a mess and I decided to reogranize.

Unlike the app that I was using for keepass on my android, there is no virtual keyboard associated to the official bitwarden client. The virtual keyboard can help in some situations where the autofill API of android does not work. I will see out it goes. You can have a bit more information on these threads : https://community.bitwarden.com/t/android-virtual-keyboard-for-field-and-password-entry/3735 and https://github.com/bitwarden/mobile/issues/62

On the point of the Two-factor authentication on bitwarden, I think that in theory it could be a good idea. However :

The second point can be handled by two different considerations :

On other points, I had to modify the default configuration to get some behaviors of keepass (auto-close the vault when going to sleep, automatic startup etc) but nothing too complicated.

In conclusion, I would say that the shared keepass using a cloud (either self hosted or not) is a good idea and that is working up to the small issues I have discussed on the synchronisation on the non-uniformity of clients. Also, for most people, you can use a solution like bitwarden (or other password managers) with a free solution for individuals.

Anyway, the specific case where you want full control over your data and get rid of the small issues can be to install a server like vaultwarden, even if new issues arise.

The first one is the synchronisation : while my nextcloud was synchronising pretty often and hence, I had almost not wait time between the edition of the database and the sharing between devices and with vaultwarden, I sometimes have to trigger a manual sync. It could only be a configuration issue though.

Another potential issue is the lack of a virtual keyboard of android but I will have to use it more to see if it’s a real issue or not.

Appendix A : Entropy of passwords

The notion of the entropy of a password is equivalent to the combinatorial description made before (i.e. we counted the number of possible passwords given the length and an alphabet), but expressed in computer way.

In fact the idea is the following : it is to say “this password is as secure as a random lists of $H$ bits” where $H$ is the entropy of the password. As a bit can take two possible values (0 or 1), there are $2^H$ differents lists of $H$ bits.

But remember, before, we were saying that with if you have an alphabet with $N$ elements and a length of $L$ then there will be $N^L$ possible passwords. Hence if we want to have the comparison between the combinatorial way and the entropy way we want to have

Then we can apply the logarithm (an operation that transforms products into sums, and hence powers into products), we have

Let’s finally take a concrete example, with the password :

How to explain this difference ? You can remark that if you generate several passwords with the same alphabet and the same size, you will end up with different entropies, which should not be the case with our model. In fact our model is valid if passwords were truly random, which is not often the case. Hence, many providers don’t use this method to compute the entropy but other algorithms.

Keepass for example use the zxcvbn algorithm, that also tries to detect patterns and repetitions (see more information on this very interesting blog post).

You can fin some information on the Wikipedia page.

In this short blog post, I have only spoken of passwords. However, nowadays, we also use other authentication methods and there are frequently combined.

The authentication methods can be grouped in 3 categories :

Often, password is one of the authentication method and the second one is often something you have (email or app or SMS).

Facial recognition and fingerprints are often used to unlock your phone (and can be considered as an additional security to the app or SMS method).

This issue with the “something you are” is that it’s very difficult or impossible to change that something. If a password is corrupted, you can just generate a new one and it’s okay. You can also change phone numbers. But you can’t change your fingerprints and it’s a hard process to change a face. 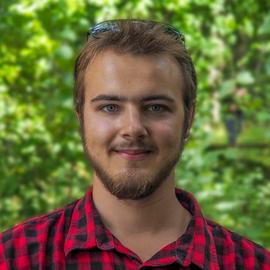 My research interests include quantum physics, computer science and cryptography.